Quartz Creek is by far the most popular sledding zone in the Golden area, and for good reason. It has almost everything a sledder could want, wrapped up in a convenient package: variety of terrain for all skill levels, a spacious warm-up cabin, a short and regularly buffed access trail, and steady accumulation of dry powder. The catch is that with its popularity, that remote and isolated feeling that sledders often enjoy in the backcountry is not part of the deal. But if you like to hang out, talk sledding and check out what everyone else is riding, there’s no better place than the Quartz Cabin. This medium-sized zone can get tracked up quickly, but just when you think it’s all packed out, try taking a left into the woods somewhere and you might just stumble upon a fresh stash that you won’t hear the locals talking about back at the cabin.

Snowmobiling at Quartz Creek, Golden BC

From the junction of Hwy 1 and Hwy 95 in Golden, blast past the highway strip of hotels and restaurants and head west on Hwy 1 towards Revelstoke for 41km. If it happens to be snowing, you’ll probably be amped to get there, but take it easy on the drive as there are several notoriously slippery sections along the way when the road conditions are poor. After 30 minutes or so of driving, turn left into the signed Quartz Creek parking lot. As you pull in, you will see that the parking area is divided. If you’re pulling a trailer, turn left again into the expanded double-lot on the east side. Trucks are permitted to park in the west lot ahead, next to the ticket kiosk. Parking at Quartz is a cinch, and there is plenty of room.

Grab your trail pass or flash your club membership at the booth, and get ready to head up the trail. There is a transceiver checker at the trailhead that will flash green if it receives a signal when you get close, which is handy for double-checking that your device is turned on and transmitting. The trail into Quartz is straightforward. It is groomed several times a week and daily on weekends, so you can be assured that it is usually very smooth—at least on the way in. The trail is wide but it’s a good idea to stick to the right anyway, because with as much traffic as Quartz receives there can often be riders traveling in the opposite direction, even when you least expect it.  There are a handful of infrequently running avalanche paths that cross the trail on the way to the cabin, as can be noted on the photographic map at the trailhead. Also, be aware of a few steep cutblocks directly above the trail that are potentially hazardous in extreme conditions. At 13km is a series of overlapping avalanche paths known locally at the Twin Slides area, which does run occasionally throughout the season. It’s good practice to spread out while crossing this area, and avoid the temptation to stick around and play in the runouts.

Rounding a corner, the Quartz Cabin will pop into view on the left after 14km of trail. This large cabin is well supplied with firewood and has a custom woodstove that works to quickly heat up the shelter. Amenities include a scattering of picnic tables inside, walls lined with hooks for hanging gear and a drying rack for wet stuff near the stove. The cabin is big enough to accommodate quite a number of sledders inside at one time, and a planned renovation for a covered deck will increase the overall usable space. Across the meadow to the south of the cabin is a beacon training park—a fantastic tool available for use by anyone to practice their transceiver rescue skills.

After a quick warm-up in the cabin, it’s time to head out and explore the area. There are two main routes leaving the cabin that are intermittently groomed throughout the season. Straight ahead of the cabin to the southwest is the trail that leads up to the Prairie Hills area. The mellow trail follows along the right side of a creek for 600m before opening up at the base of a long sub-alpine bowl. There is a benchy area on the left that can be accessed from a climb a little farther up the valley. A convoluted route goes all the way up to the ridgeline above. The headwall at the back of Prairie Hills is a large, steep slope that frequently slides. On the northwest side of the valley the bowl wraps around with a gently sloped area of treed gullies and fingers. The snow is usually well protected here by the trees, making it deep and fluffy. There are a lot of mini-features in this area, making it super fun to ride.  At the top of the northwest side of the valley is the access point for two alpine bowls known as Area 51 and Area 52. To reach them, you will have to make a decent pull up a well-established climb that is somewhat off-camber and usually dirty near the ridgeline. At the top of the climb, you will be looking over Area 51. To get to Area 52, head up and along the ridgeline. By now you should be aware from various signage posted throughout the zone that Quartz Creek is largely surrounded by the boundary of Glacier National Park, which runs along the height of land from Dauntless Mountain all the way around to the back of Area 52 and beyond. Although the boundary is well signed, it is up to the rider to know where they are in relation to the park, which is off-limits to snowmobiles. Large fines and/or seizures can result from riding in the park, so just don’t do it, even when fresh snow beckons from the naughty side of the line.

The ridgeline that runs past the top of Area 51 and 52 is just such a place, so be aware of that and stick to the east side of the highest point of land. You can legally access Area 52 in this manner by traversing the ridgeline past Area 51, and dropping into the bowl at the low point of a ridgeline saddle. Just be aware of the large overhanging windlip—which can be hard to spot from above—that generally forms here.

Both Area 51 and 52 are enjoyable, offering classic alpine riding with rolling features in the bottom of the bowl and steep, challenging walls to climb on either side. Pay attention to cornices, which indicate predominant winds and potentially wind-loaded features. There is a sneaky line to exit Area 51 at the bottom of the bowl, but to get out of Area 52, you’ll have to head back the way you came. The bowls beyond Area 52 are reserved for heliskiing as per local agreement, making them off-limits for sledding.

Back at the cabin, the second main option for riding is to take the occasionally-groomed route to the south past the beacon basin. The trail heads up somewhat steeply for half a kilometer before leveling out at the start of what is known as Old Cabin Valley. You guessed it, there is a decrepit old cabin abandoned farther along, tucked in some trees. Old Cabin Valley is made up of a wide, flat valley bottom, flanked by the steep slopes of Dauntless Mountain to the northeast and the rest of the Quartz riding area on the other side. It extends 1.5km to the southeast, where the Glacier National Park boundary intersects the valley between Dauntless and Top of the World across the way. The upper plateau of Top of the World can be accessed by a steep climb that starts out through some trees on the west side, near the start of Old Cabin Valley. From the upper plateau, a number of good riding opportunities can be found. There are a couple of mini-bowls as well as some treed ribs that offer great downhill turns in blower pow. Near the ridgeline are some cornices and wind features to play on. And heading north, you can explore some upper benches, or take a high road that connects back to the Prairie Hills side of the zone. After exploring both valleys you might think that you’ve seen it all, but some of the best riding and snow can be found on the treed slopes above the cabin. Don’t be afraid to poke around, and you’ll be sure to find some fresh stuff away from the weekend crowds.   Click here for more information about riding in the Golden, BC area. 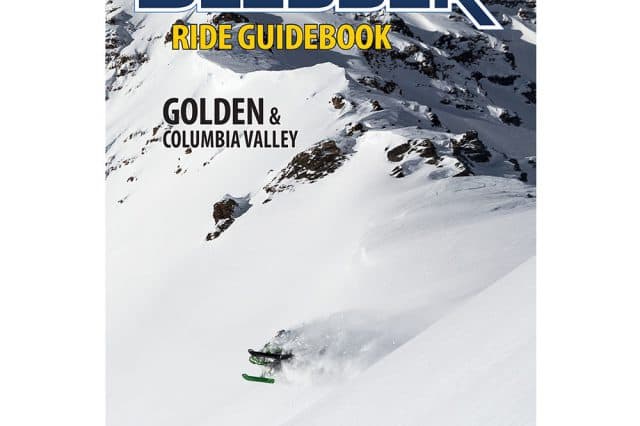 See our Ride Guidebook for a full description of Quartz Creek and all other ride zones in Golden and the Columbia Valley. 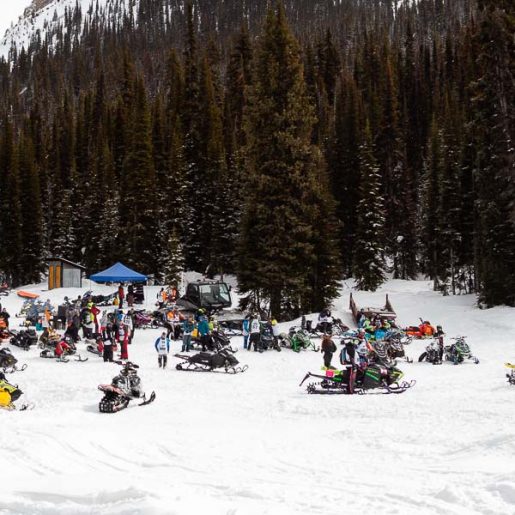 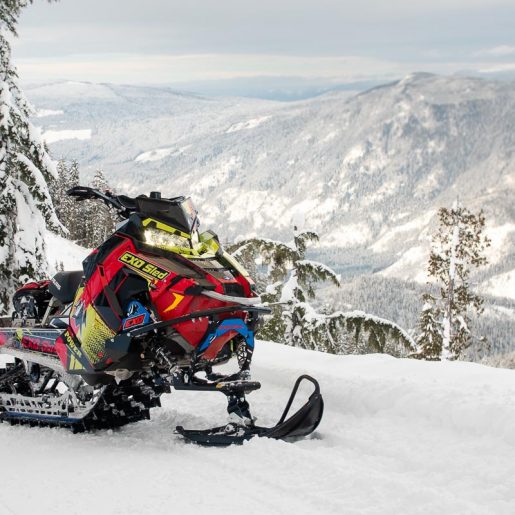 What is the EXO Sled? We Ride it and Find Out 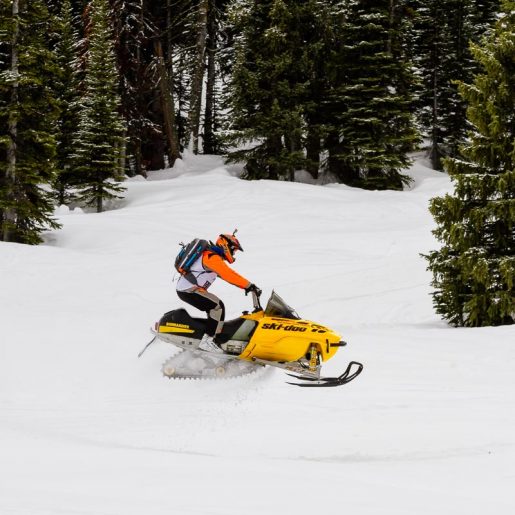 A Knife to a Gun Fight 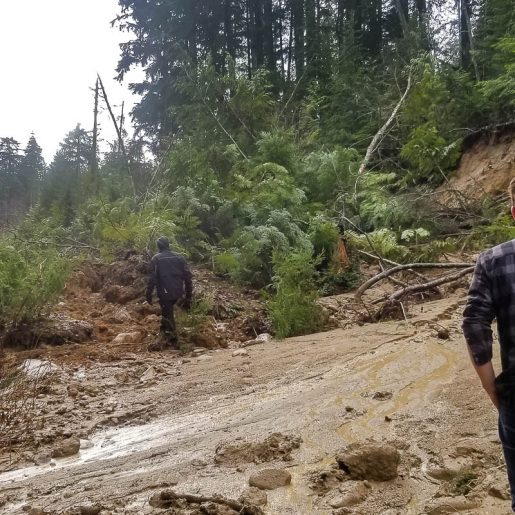