Interview with Ella Snäll – First Woman to Backflip on a Snowmobile

At this point, Ella Snäll shouldn’t need an introduction. But just in case you spent your Christmas and New Year holidays out of wifi reach or with your head in the toilet, she was recently the first woman to backflip a sled. Hailing from the northern-most town in Sweden, she took advantage of the limited daylight to ink her name in the history books.

Note: The interview was conducted in English and is largely unedited to preserve the authenticity of Ella’s experience in her own words.

How long have you been snowmobiling and how did you get into it?

I grew up in an environment where the snowmobile always was present, both as transportation and recreation. My interest for snowmobiling really started in 2012 when I was up in the mountains with a couple of friends who had sleds. In 2013 I decided to buy my own sled and have been riding a lot since then. Before I was riding snowmobiles I was a full time athlete in gymnastics.

Who have been your biggest sledding influences?

Everything went really fast for me. Already the second year of riding I participated in a snowmobile movie called Ruffriders X. So all the guys in the crew had a big influence on me and a big part in my development. At first I was just interested in backcountry riding but after I met my boyfriend Tobias Hellström I got more into freestyle because he’s riding freestyle on a professional level and making a living out of it.

How long ago did you get into freestyle?

2014 was the year I met my boyfriend and saw them jumping and followed them on shows. That autumn I decided to buy my own ramp so I could start jumping as well the upcoming season.

When did you hit a ramp for the first time?

January 6 in 2015. I started jumping on a homemade comp-ramp and was the year I did my first freestyle show with the guys. In November 2015 I switched ramps to a Superkicker, the same as the guys jump on.

When did the idea of backflipping enter your thoughts?

I have seen the guys doing it a while now and 2 years ago I thought that I would like to do it as well. From that I haven’t been able to let that thought go away.

Did someone mentor you with the flip?

Both Tobias and our friend Rasmus Johansson have told me how to do it. Most of the preparations I have done by myself; going through the motion in my head while standing on the sled and practicing the moves. Have also been looking on clips and movies of people doing backflips and really studied how they do it.

What was the process, the steps you took to get ready for the backflip?

Just process it in my head and tried to see it in front of me how it would be. When we were planing this project and the day came closer I just felt ready and knew what I had to do to complete the backflip. Success was the only option and that helped me to manage my fear. People ask why I didn’t do it to a foam pit or something like that before I take it to the landing, but to be honest, a foam pit scares me more and then I have to take one more step before I make it to the landing.

There must have been a lot of thoughts going through your head right before you pulled the backflip. What were you thinking about as you rode into the ramp and while you were rotating?

My only thoughts that I have was: it’s now or never. If I don’t do it now I will regret it. I wanted this so badly so to make it happen no matter how it will end was everything I think about. When I rode in to the ramp I told myself, hold on to this sled so tightly and don’t let it go. Everything else is solved. Hold, hold, hold, then I already was upside down and at that moment I just felt I did it!

What feelings did you have after you landed the backflip?

I felt relief, happy, had so much adrenaline and it felt unreal but so much fun to do it! It was much easier then I thought. I had tears of happiness from me, and all the people who was with me. It was also a big relief for my boyfriend, I have never seen him so nervous like he was that day.

All the feeling are indescribable but I have taken a big step for my head and my journey. Nothing is impossible and that’s what I want to show the people and especially all the girls. I want to inspire all the ladies out there and prove that everything a guy can do, a girl can do as well.

Do you plan on flipping more or was this a one time deal?

Yes I will for sure do it again. My next step is to take the backflip with me in the backcountry. And when I have done that we will see what’s next.

What snowmobile where you riding and what modifications have you made to it?

I ride a 2015 Skidoo RS 600, and haven’t done any modifications on it except put some stomp grips on the tunnel; it helps your foot to not slip.

Thank you for taking the time for this interview Ella. If you have any shout outs or thank yous, fire away!

My biggest passion is to develop, have a fun journey and see other people success. Other’s happiness is double happiness. And I want to thank everyone who believes in me and want to follow my journey.

How to Double on a Snowmobile in the Mount... Previous
Next Polaris INDY EVO – New Youth Sled Availabl...
More Related Posts (People)

What I Choose To Ride and Why 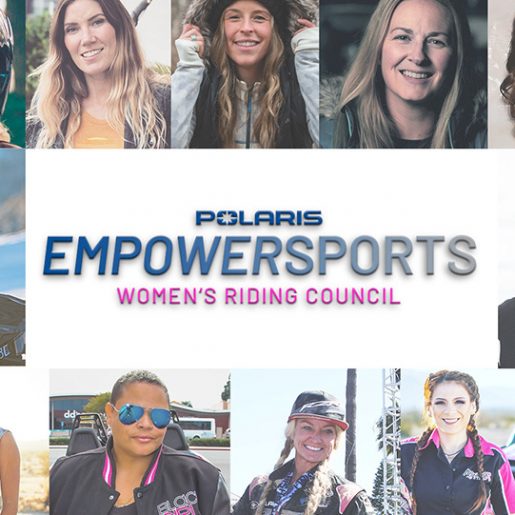